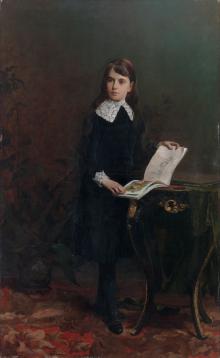 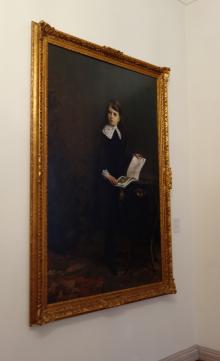 Portrait of a Girl

After studying art in Munich, and a year spent in Paris with his brother, KAZIMIERZ ALCHIMOWICZ (1840–1916) settled in Warsaw in 1877. In 1880, he opened a private painting studio. He was mostly famous for his history paintings and for his mythological compositions about the past of Lithuania. However, his Portrait of a girl, painted in 1885, shows a talent for portraiture. This large portrait was most likely painted in Warsaw, and the sitter was probably a member of the educated nobility. It is a rather unusual portrait, as she looks serious and composed. The composition gives us a glimpse of a room: a soft patterned carpet covers the floor, an agave plant in a pot and some other exotic plants stand in the background, and books of drawings are displayed on an elegant table decorated with gilt carving. The girl is holding an open book of drawings in her hands: they may be her own work from the beginning of her art studies. Her black velvet knee-length dress, of a rather simple cut with sumptuous white lacework, her black shoes and stockings in the same colour, and her hair tied with a red ribbon, suggest that her family had a sophisticated and modern taste. Black was in fashion as a sign of mourning after the 1863 uprising, and remained popular for a very long time, becoming even more fashionable at the end of the 19th century. But the obscure background and the dark attire in this portrait serve mainly to bring out the bright elements in the painting: the girl’s face, and the book of drawings which reflects her artistic nature.