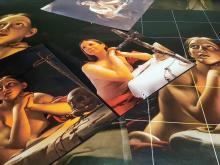 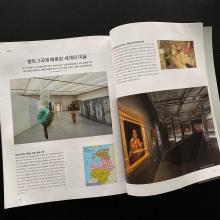 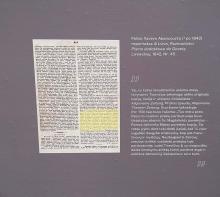 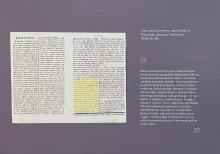 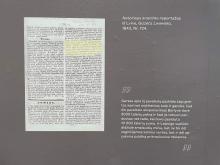 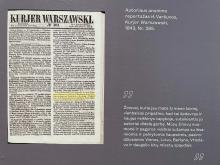 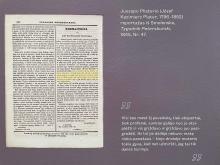 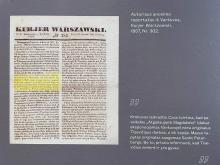 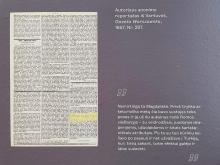 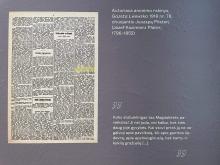 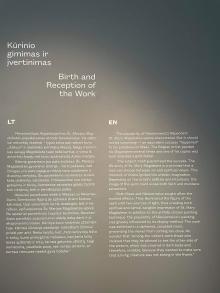 The Penitent St Mary Magdalene by Wladyslaw Niewiarowicz (alias Jonas Tysiewicz as of 1840) is, without the shadow of a doubt, his best piece of work that received a tremendous response from the public right after it was revealed. St Mary Magdalene is portrayed as a penitent hermit in a cave leaning against a rock, her hands set in prayer against a cross made of sticks and a skull. Her half-naked body is illuminated with the warm light from a small oil lamp and the cool moon rays coming from the painting’s top-left corner, where appears to be a hole in the rock. On top of the rock, there is a tool of discipline – a whip for self-flagellation. We would be within our rights saying that no other piece of work by a graduate from the Vilnius School of Art (or a 19th century Lithuanian painter in general) received as much attention in the press of the period or was showcased at as many exhibitions as this one. The artist himself created several oil and watercolour versions of the fabled picture; its lithographic copies would be printed as well. Authors from the late 19th century were very generous in their appreciation of the Magdalene by Niewiarowicz– Tysiewicz because it was considered to be the first painting of the ‘Polish paintbrush’, its exhibition to travel different European countries and draw the attention of foreign art experts. The signature and the date inscribed on the painting date Niewiarowicz’s Penitent St Mary Magdalene 1842. The artist signed the painting using his pen name, J. Tysiewicz. (Text by Rūta Janonienė, PhD).

Niewiarowicz did his canvas St Mary Magdalene in Vienna in 1842 after The Penitent St Mary Magdalene, a painting by Jan Baptist Maes, a Belgian painter based in Rome. This fact does not diminish the value of the painting in the least. Niewiarowicz’s canvas is not a verbatim copy of the original image: it is rather an interpretation done talentedly, a challenge of the young painter to his older peer. In mid-19th century, Niewiarowicz’s St Mary Magdalene most probably was the product of the ‘Polish paintbrush’ of the highest foreign renown. Its fame was due to Felix Boznanski, a Polish army officer, writer, and musician, who bought St Mary Magdalene and took it on a tour across different European countries, putting it on display in Vienna, Berlin, Dresden, Leipzig, Lvov, Warsaw, Moscow, St Petersburg, to name a few. The painting would be well received and attract a crowd of viewers in all of these places. The success of the show was owed to the artistic qualities of the painting just as it was to the theatrically enhanced display. A reviewer of the 1843 Warsaw exhibition cites that Niewiarowicz’s canvas was ‘displayed in a dimly lit room, illuminated with an artificial light. The frame of the painting was covered in black velvet, and the manmade barrier would not let the viewers anywhere near the painting, but the painting’s reflections could be viewed in the mirrors suspended nearby. The floor of the room was covered with soft carpets lest footsteps disturbed the quiet; besides, only a few people would be let in at any one time.’ Spurred on by his success, Niewiarowicz did several replicas of the picture. The 1842 original of the painting is kept in a private collection in Lithuania. (Dalia Tarandaitė).

Very few works of the old Lithuanian art are known for such immense popularity and enthusiastic response by the contemporaries as the Repentant St. Mary Magdalene by Władysław Niewiarowicz (also known by his alias Jan Tysiewicz, 1814/1815–1891). The depiction of the saint created following the work of Belgian painter Jean Baptiste Lodewijk Maes (1794–1856) was not just a mere copy. The work painted during the artist’s studies in Vienna was soon awarded a gold medal and purchased. Upon acquiring the work, the officer, writer and musician Felix Boznański (c. 1793 – c. 1860) began to showcase it across Europe in a solo painting exhibition. Berlin, Dresden, Leipzig, Lviv, Warsaw, Moscow, St. Petersburg, Grodno, Poznan, Vilnius… The entire journey was followed by abundant press reviews, famous cultural figures mentioned the work in their letters, even poems were written to honour the painting, and it was frequently labelled as masterpiece, a triumph of the artist. What was the reason for such acclaim? Niewiarowicz’s painting is a masterfully executed ambitious interpretation of the prototype. The viewers were, and still are, fascinated by the meticulous drawing, the colours, and the impressive chiaroscuro. With these techniques, the artist managed to create a particularly vivid, carnal image of the saint. Contemporaries noticed it saying that “in other paintings dedicated to Magdalene, one sees only utter repentance, absolute anti-sensuality; in other words, in a skinny and tired face, in the sagging and tortured body, one sees only the soul; while here, there is sin, repentance, uncertainty, power, body, and spirit all in one.” Finally, no less important for the influence and popularity of the painting was its smart display with complementing theatrical and optical illusions that enhanced the glow effect and real-life impression.

Lewben Art Foundation's art challenge for colleaguess, 21 April 2020. When quarantine began in various parts of the world and the closure of museums, they have created an artistic challenge by encouraging people to recreate the world’s most famous works preserved in art museums at home (photo added).