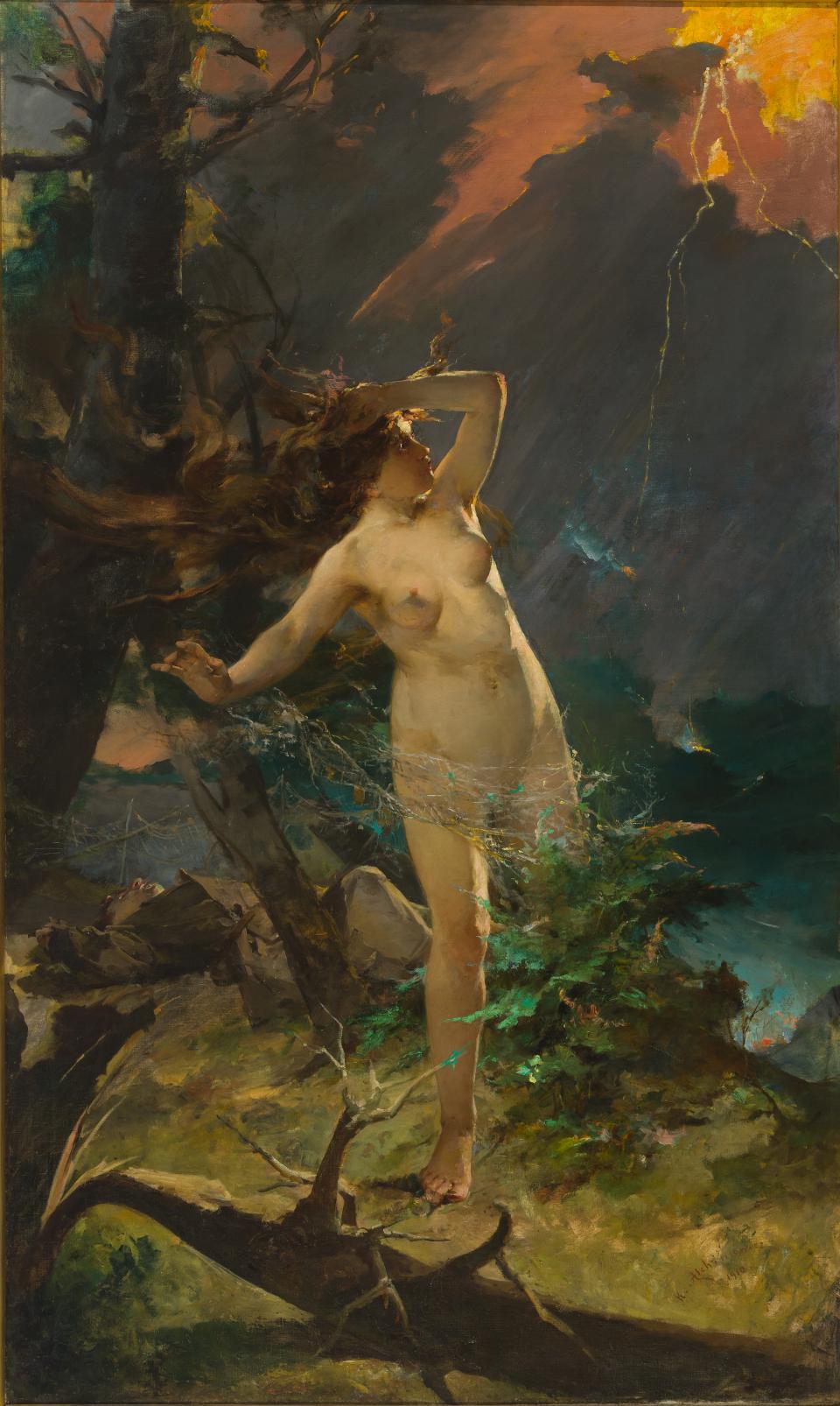 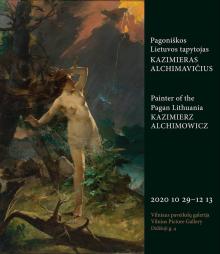 The show Kazimierz Alchimowicz, the Painter of the Pagan Lithuania has found its representation in Milda, one of the artist’s most famous pieces of work. The painter did his first picture in Warsaw in 1890. At the time, Alchimowicz was a celebrated painter of Lithuanian history and mythological scenes, the author of the paintings The Death of Margiris, Lizdeika and His Daughter Pajauta Amidst the Ruins of Perkūnas Shrine, The Death of Mykolas Glinskis in Prison, Gediminas’s Funeral. Working on Milda, the painter drew his inspiration from the love story of Milda, the goddess of love, and the Lithuanian fisherman Ramojus, the wrath of Perkūnas that befell them, the tragic demise of Ramojus, the Milda’s flight as told in Witolorauda (Witol’s Lament), a poem by Józef Ignacy Kraszewski. Alchimavičius portrayed the moment of penance that Kraszhewski had described in his poem as follows:

And the eastern mountains trembled at their roots,

And rushed with storm and devastation on their breath.

The finished painting was first put on display in Munich, at the annual art exhibition that took place in the summer of 1890. It was well critically received and described as ‘lovely to behold, beautifully done, full of sensuality’. A Berlin company printed a reproduction of the painting. The very same year, Milda was showcased at the exhibition of the Wojcech Gerson competition held by the Fellowship for the Promotion of Art, where it won the first prize of 600 silver roubles.

In 1891, the year after, Milda was displayed at the Krywult parlour in Warsaw, at the exhibition of the Fellowship of Friends of Art in Cracow, and, most importantly, at the international art show in Berlin, which was ceremoniously inaugurated on May 1 and ran until September 20. The Berlin show was a big event for the Poles, with Milda awarded the Small Gold Medal.

Having visited the international art show in Berlin, Dr Jonas Basanavičius so wrote in the Vienybė Lietuvninkų: ‘O wonder of wonders: I could not believe my eyes when I saw this inscription below the painting by Kaz. Alchimowicz (No 3801): Milda (Venus der Litthauischen Mythologie). The painting, in which Lithuanian Milda – the name Milda often occurs in Juszka’s songs – is portrayed, is very large. In this painting, Milda, the goddess of love, is depicted as a young – naked – girl with long blond hair and blue eyes and frankly, looks like the image of bodily beauty. She is standing with one hand raised to her head, her right arm thrown back; behind her, there is a strapping, young man, who appears to be dead, lying at her feet. The tree stumps, uprooted as if by a storm, the gushing water of the stream, the darkness of the forest in which Milda is standing, the lightning – all that adds to the scenery. A flock of people are standing shoulder to shoulder before this Milda of ours, admiring her beauty; and that this picture is charged with a sui generis beauty, there is no doubt about that. Just as there is no doubt that any Pole who happens to behold Milda, will be sure to say: ‘scena dzika, jak dziki Litwin’ (the scene is wild, as wild as a Lithuanian). Whether Alchimowicz has managed to convey that idea, I don’t know; all I know is that his work deserves to be bought by some Lithuanian patron to stay in Lithuania.’ (Jonas Basanavičius. Gromata iš Berlyno (A Letter from Berlin). Vienybė Lietuvninkų, 1891, No 30, p. 357).

In 1893, Alchimowicz’s Milda was featured at yet another major exhibition: the World’s Fair in Chicago commemorating 400 years of the discovery of America and Christopher Columbus (it ran between 1 May until 3 October 1893). At this show, Alchimowicz showcased 5 paintings, of which Milda was put on display in the main hall, next to pictures by Poland’s celebrity painters. One reviewer of the show wrote: ‘The viewers are captivated by several large canvasses; the most popular of them – it being the most surprising of the lot – is the one that shows a gloomy forest with a naked young lady startled by a flash of lightning and a spurt of rain falling on her, and a handsome young man lying at her feet. Luckily, the painting comes with a legend, which reads that, according to an old Lithuanian legend, Milda, the goddess of love, fell in love with a young fisherman and was punished by Perkūnas, the god of thunder, who slew the young fellow and brought ruin to the “amber palace on the bottom of the Baltic Sea”. This picture, which has had its reproduction put on display in Germany as well, is done by Alchimowicz of Warsaw.’ (S. Listy z Wystawy Kolumbijskiej (Letters from the Columbus Show). Czas, 1893, No 187. p. 1).

The 1894 Chicago exhibition was moved to San Francisco, then to Los Angeles. On 25–26 April 1895, the works by Polish painters showcased at the Chicago exhibition were sold at an auction in New York. Alchimowicz’s Milda was sold for 625 US dollars, a large amount of money at the time. The Baptism of Lithuania by Wojcech Gerson went for 425 US dollars at the same auction. Interestingly, both paintings were bought by one man – the Rev Dean Hoffman.

Since then, the original version of Milda had vanished from the radar for a long time. In 2018, the painting appeared at the Agraart auction and was bought for the Art-Belarus collection (for an illustration, see https://artbelarus.by/ru/collection/5283.html?from_artist=16410).

In 1910, Alchimowicz made two replicas of Milda. One of them is kept at the National Museum in Warsaw, the other was brought to Lithuania through efforts of Lithuanian collectors and is currently in display as part of a show at the Vilnius Picture Gallery. So, with the passage of more than a hundred years, Jonas Basanavičius’s wish for Milda to be brought to Lithuania has finally come true.

Author: Dalia Tarandaitė, art critic and curator of the show Kazimierz Alchimowicz, the Painter of the Pagan Lithuania.

"– And what did you see? – hollered Perkūnas in anger

And pointed down to earth.

– Father, I saw a terrible thing!

Have you any idea where Milda is?

– On earth, most likely.

– That is correct, in her own grove; but what keeps her there? –

– The night – it is her time. In it, she makes the heart grow hot

And melts the lips, and pours down pleasures in abundance. –

– Her! O, look at what is happening in Lithuania!

There’s no more love, no marriage, no more concord.

It’s not for prey that she is waiting in her grove;

She’s being intimate with man!

I saw them both a flash ago,

As they escaped each other’s arms,

And he of sacrilege ran off along the Nemunas’s banks.

My father! Punish Mildą! Strike her down!

And the eastern mountains trembled at their roots,

And rushed with storm and devastation on their breath."