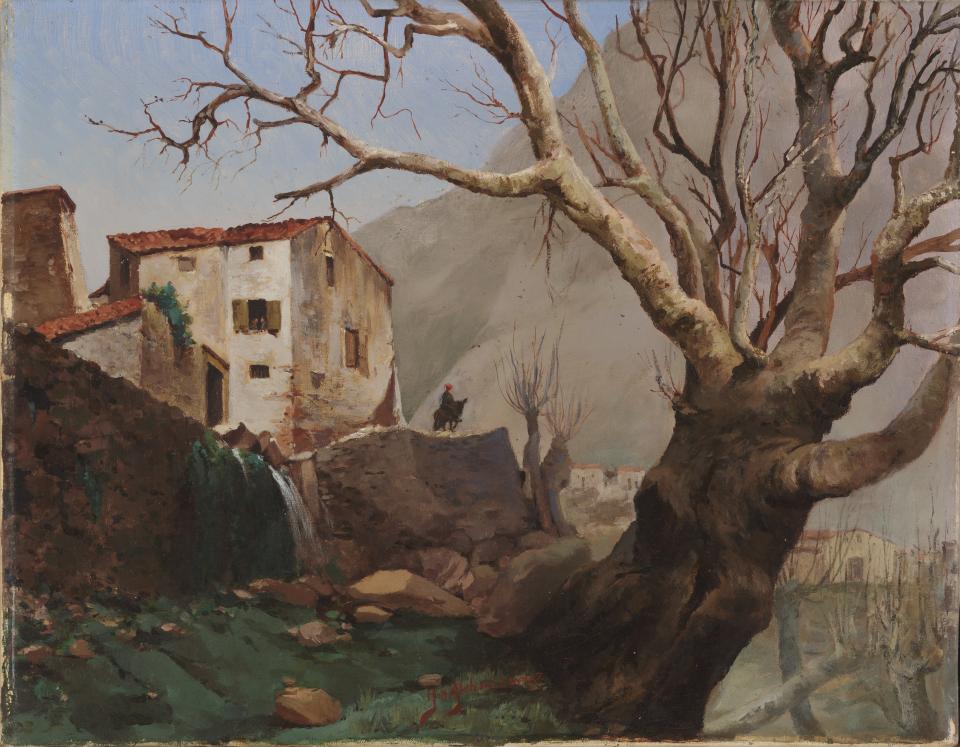 Created: first half of the 20th century.

Hiacynt Alchimowicz is first and foremost known for his landscapes and daily domestic compositions. Since he took residence in Perpignan, Roussillon (France) in 1864, he mostly had been painting pictures of the area and its surroundings. A Pyrenees Landscape could be attributed to the latter period if his creative work.

A Pyrenees Landscape was painted on set, its composition is lively, asymmetrical but perfectly balanced, possessed of fragmentation reflecting the latest trends in landscape-painting of late 19th century. In the foreground on the right, painted against the backdrop of a far-away mountain, there is an old leafless tree, most of its branches cut off by the edge of the painting. On the left, a dark and shadowy line of stonework draws the beholder’s eye deeper towards the sunlit brick houses, their diminishing line descending until it becomes hidden behind the dark trunk of a tree. This harmony of the typically southern, modest and even somewhat harsh architectural forms and nature is portrayed through a balance of criss-crossing lines and well-lit and shadowy areas.

Staffage, a typical feature of Alchimowicz’s landscapes, is present here as well, with a tiny rider shape painted on a rock next to a house, and two more little shapes barely visible by an open window inside the building. These shapes both liven up the view and emphasise the idea of the landscape: the harmony between the great and eternal nature and a cultured landscape inhabited by men. The bright, sunshiny landscape exquisitely conveys the mood of a warm and clear early spring day that is full of premonition of a summer to come.

Reference by dr. Rūta Janonienė, Chief research worker at the Institute of Art Criticism of Vilnius Academy of Art.