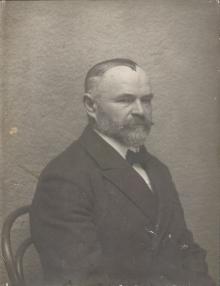 A Ravine in the Mountains

Kazimieras Stabrauskas’ work Tarpeklis kalnuose (A Ravine in the Mountains) conveys a mysterious symbolic idea. The castle is a symbol borrowed from Romanticism: it is an aesthetically valuable object as well as an expression of human loneliness. The ravine, on the other hand, indicates a transition period in a person’s worldview and creativity. Stabrauskas’ work depicts a ravine and an abyss, most probably symbols of turbulent, changing times, new explorations, and an individual’s choice between death and freedom… The choice between freedom and death in the backdrop of loneliness is the most fascinating thought in the mind of an individual. The (un)controllable submersion of mind, feeling, and intuition in a sea of choice creates a unique moment for the meaning of life.  In this painting, the author reveals himself to be a thinker and philosopher of the 20th century. This highly symbolic work is closely related to Priešaušris (Before the Dawn), Tolumos (In the Distance), Saulėlydis (Sunset), and Medžiai (Trees). The work emits Sabrauskas’ characteristic energy, his sense of the afterlife expressed through the natural world, the creations of God. The plot is more mystical than lyrical or sentimental. The work has its own way of speaking and hardly needs an explanation. The spirit of the times expressed in this picture is reminiscent of Jonas Biliūnas’ famous literary work “Laimės žiburys” (“The Light of Happiness”, 1905, Zurich).