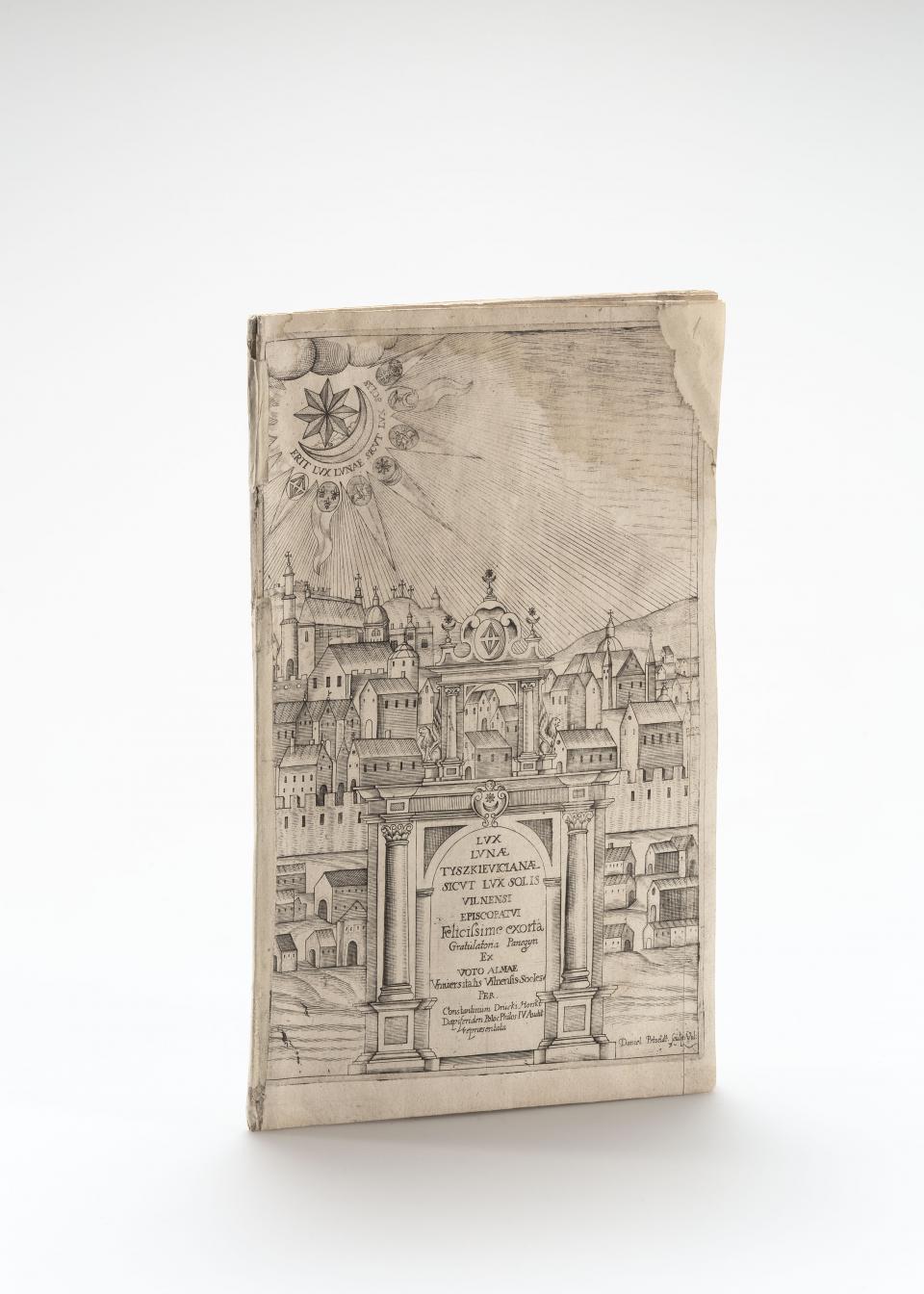 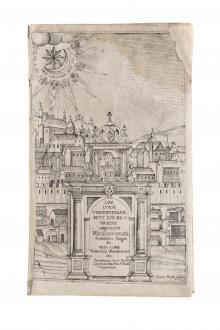 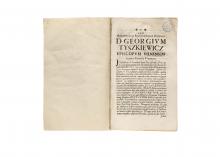 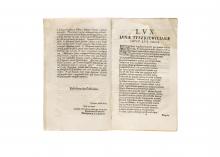 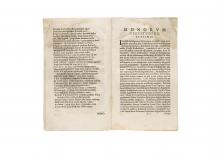 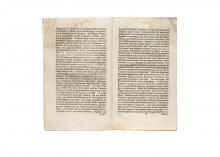 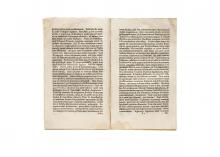 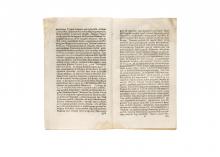 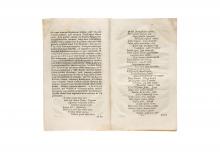 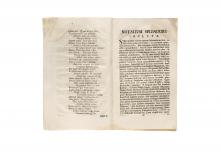 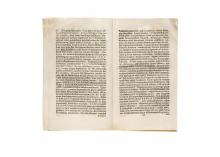 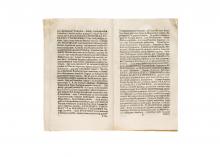 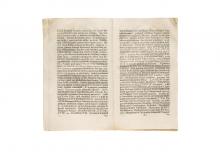 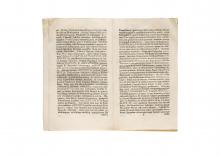 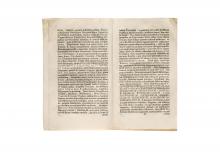 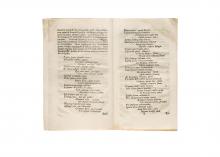 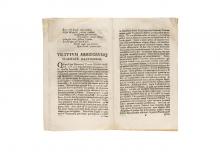 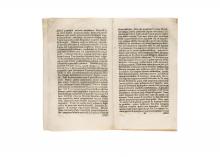 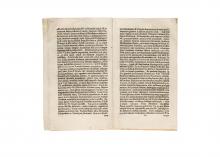 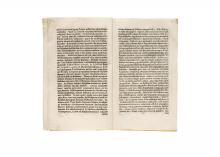 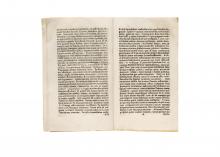 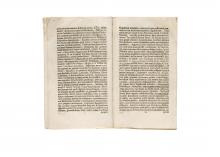 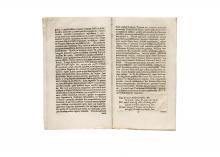 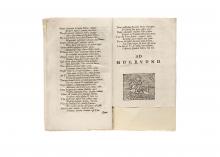 Title in English: The Moonlight of Tyszkiewicz is Sunlight to the Episcopate of Vilnius, That Rose Happily Greeting the Panegyric from Vilnius University of the Society of Jesus / By Constantine Drucki Horski, Stolnik of Polotsk, […] Reconstructed.

A panegyric dedicated to Jurgis Tiškevičius (1596–1656), the newly elected Bishop of Vilnius, in celebration of the occasion (1649): “Tiškevičius’ moonlight is akin to sunlight, shining happily on the diocese of Vilnius…” The first words of the title are making a beautiful reference to the Tiškevičius’ family coat of arms, which includes a half moon (as seen on the frontispiece).

Only two of these books are known: one in Lithuania (the library of Vilnius University, with defects, p. 1 - 4 missing; restored) and one in Poland (Osolinski library). The book is not only interesting for the text, but also for the two illustrations. The first (frontispiece) depicts a panorama of Vilnius (a description of it by Vladas Drėma is provided below), and the second (on the last page) shows a horseman yielding a sword above the city. The city is Vilnius (the Hill of Three Crosses is recognisable) and the horseman is a Jesuit (the Jesuit monogram IHS is visible on his shield). The illustration refers to the fact that Vilnius is under the care of Jesuits.

Professor Eugenija Ulčinaitė’s comment on the book (excerpt from a text on Lithuanian baroque literature):

The panegyric, dedicated to the new Bishop of Vilnius Jurgis Tiškevičius -  “Lux lunae Tyszkievicianae sicut lux solis ...” (1649)  -  is written both in prose and poetry, employing various classical meters: hexameter, elegiac distich, Alcaic stanza. The images of the moon and the stars  -  the key components of the Tiškevičius’ coat of arms  -  are used to create various poetical allusions and connections to classical literature, history, and mythology. The author Constantinus Drucki Horski makes many references to the Olympus, the Styx, the Avernus, the cruel sisters Parcae, Hercules, Phoebus, Atlas, and Alkidas, and does not believe it to be improper to draw comparisons between a prominent person of the Catholic Church and the classical Pagan heroes. By comparing the Bishop’s arrival to the city to the first signs of the coming spring, Horski creates a beautiful natural image, which draws on the Lithuanian landscape:

The engraving by Peceldas depicts a partial panorama of the city, starting with the Lower Castle on the left up to the Bernardine Church on the right, the defensive wall and the houses on the outskirts below. The city is depicted from the west side. The picture is diligent, accomplished, with rich shadows and slightly simplified shapes, has a clear tectonic solution. The panorama slides down the hill and continues from the north towards the south. It begins with the clear cylindrical Cathedral Bell Tower and the Cathedral itself, shown from the southwest angle. Behind the Cathedral, the Chapel of Saint Casimir is already built, with only the dome and the upper windows visible. Behind the Cathedral, the towering Palace of the Grand Dukes can be seen, and in the distance, the hills with the Three Crosses and Gaspar Bekes’ mausoleum. In front of the Cathedral, there is a fragment of the defensive wall and the old Bishops’ Palace beside it. Further on, the defensive wall connects the Bishops’ Palace to the rotundal defensive tower with a dome. These buildings are partly obstructed by two lines of large mortar houses. These are most likely the buildings of the Cathedral Chapter: the vicarage, the school, etc. They are standing right next to the city’s defensive wall. Through the window of the gates of honour, the view continues, showing several unrecognisable houses, possibly the buildings of the institutions of the Lower Castle (the treasury, the tribunal). Depicted on the right, in the depth of the picture, is the Bernardine Church with two corner towers of the façade. Over the roof of the church, the dome of the Church of the Blessed Mother of God. The front of the Bernardine Church is obstructed by the large Palace of the Bishop of Samogitia, and also the Guard House before it. Drawn on the far right of the panorama, just behind the defensive wall, is the Church of Mary Magdalen and the Gates of Mary Magdalen, also known as the Wet Gates. The defensive wall is depicted with crenelated walls and arrow slits.

The Moonlight of Tyszkiewicz is Sunlight is a panegyric written by Vilnius University philosophy student Constantine Drucki Horsk to celebrate Jerzy Tyszkiewicz (1596–1656) being elected Bishop of Vilnius (1649). By employing the key components of the Tyszkiewicz Leliwa coat of arms (the moon and stars) the author creates various poetic connections with antique literature, history, and mythology. The books is valuable not only for its texts, but also for its illustrations, namely the two engravings by Daniel Pelzeldt. The first depicts a panoramic view of Vilnius and the Tyszkiewicz coat of arms, a half moon and star, which links the picture nicely with the first words of the panegyric. The engraving on the last page depicts a Jesuit horseman wielding a sword over Vilnius  an allusion to the fact that Vilnius is under the care of the Jesuits.

Reference: "The Collection of Lawyer Jaunius Gumbis: the Past Preserved in Books". Museum and Collector - 7. Vilnius: National Museum of Lithuania, 2018, p. 117.

Published: "The Collection of Lawyer Jaunius Gumbis: the Past Preserved in Books". Museum and Collector - 7. Vilnius: National Museum of Lithuania, 2018, p. 116-117.