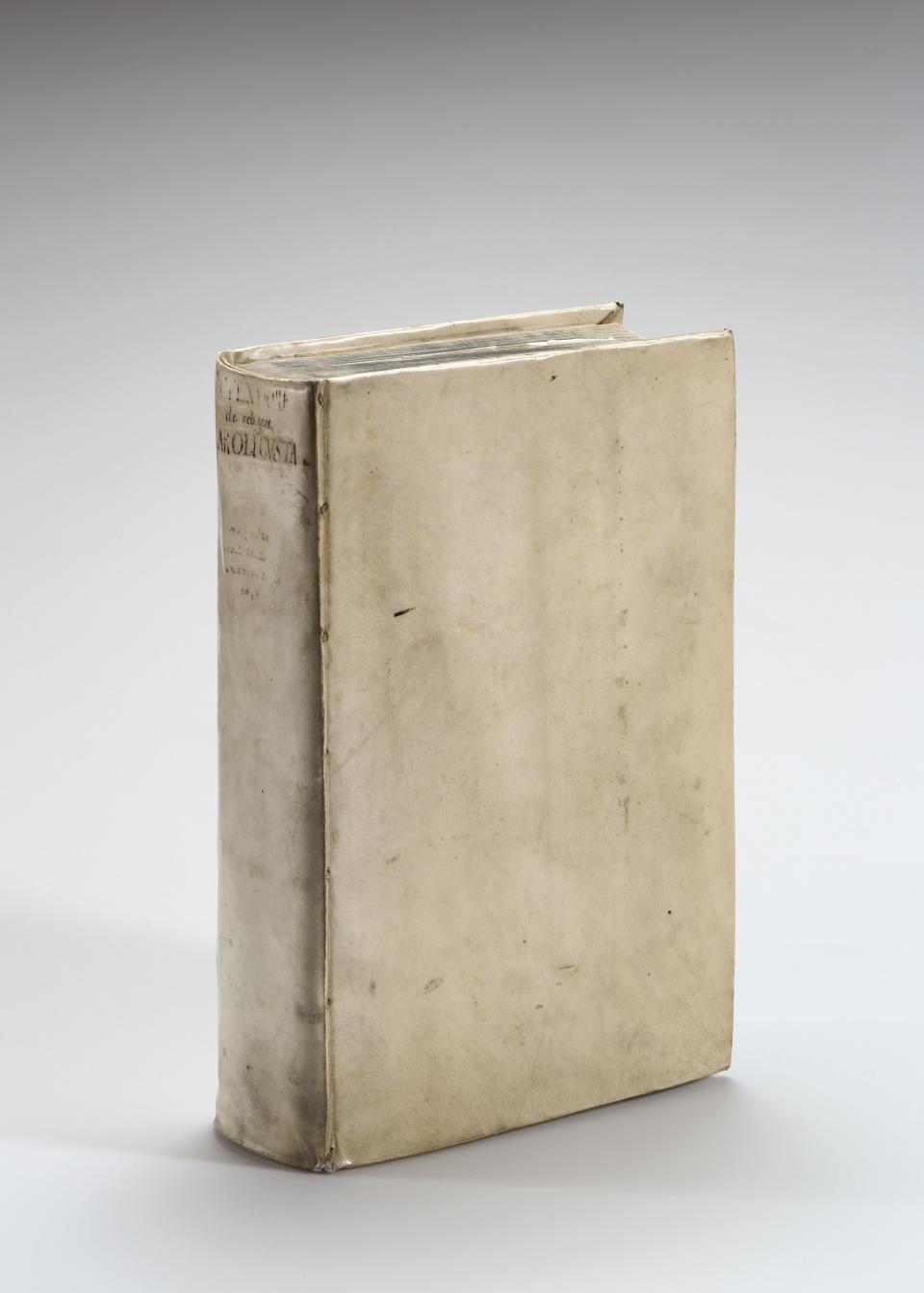 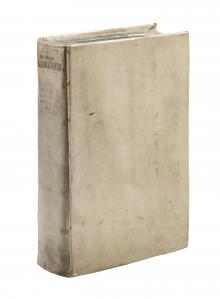 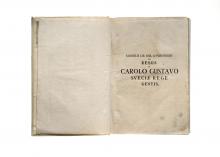 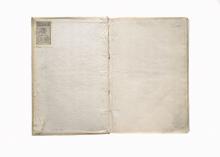 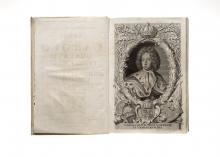 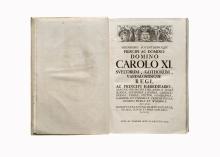 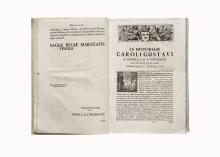 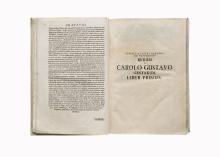 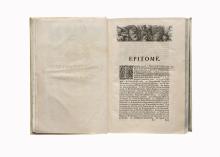 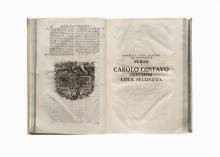 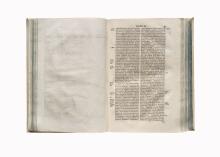 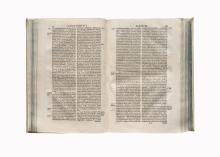 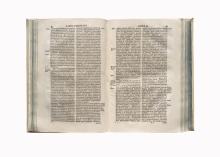 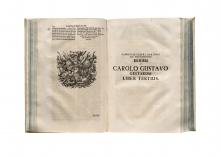 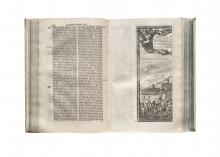 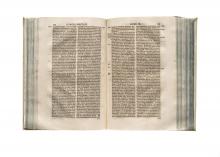 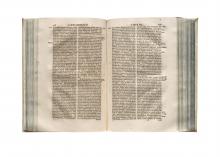 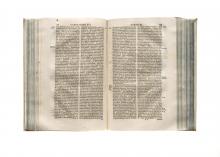 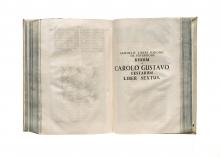 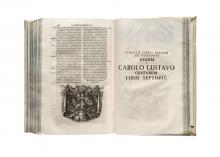 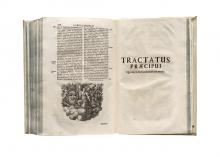 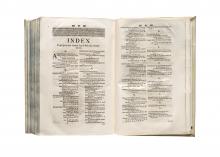 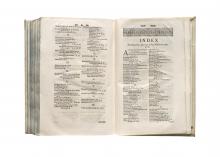 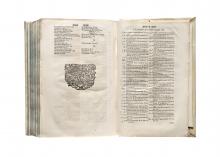 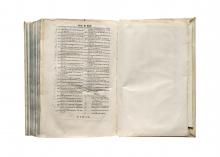 Title in English: Seven Books of Commentary on the Deeds of Charles Gustav, the King of Sweden.

Format: Folio. (6)+626+53+(10) pages. Engraved title + 12 engraved portraits +115 engraved plates, of which many folding, including a 450 cm long view of the funeral procession of Swedish king Carl X Gustav in Stockholm (mounted in the back of the book with corresponding dent in verso of back board). A most well-preserved copy: Book-block is clean and crisp throughout, and the plates are all in sharp, fine impressions.

Seven Books of Commentary on the Deeds of Charles Gustav, the King of Sweden by Samuel Pufendorf (1632–1694), German historian, jurist, diplomat and historiographer of the King of Sweden Charles XI, is a source of information about the 1655-1660 war between Sweden and the Polish Lithuanian Commonwealth. It discusses the treaty signed by Lithuanian noblemen, led by the Grand Hetman of the Grand Duchy of Lithuania Janusz Radziwiłł (1612–1655), and the Vicegerent of the King of Sweden Magnus Gabriel De la Gardie (1622–1686) on 20 October 1655 in Kėdainiai. It also includes the text of the Treaty of Oliva, which was signed on 3 May 1660 by the Polish Lithuanian Commonwealth and Sweden, and ended the war. The book is illustrated with historical scenes and maps of cities, scenes from battles, and a map of the Kingdom of Poland and Grand Duchy of Lithuania with the coats of arms of the Voivodeships. Most of the engravings were made by the Swedish war engineer, artist and cartographer Erik Dahlbergh (1625–1703).

Reference: "The Collection of Lawyer Jaunius Gumbis: the Past Preserved in Books". Museum and Collector - 7. Vilnius: National Museum of Lithuania, 2018, p. 510.

Published: "The Collection of Lawyer Jaunius Gumbis: the Past Preserved in Books". Museum and Collector - 7. Vilnius: National Museum of Lithuania, 2018, p. 510-525.

3rd: Battle of Sandomierz, 24 March 1656. By Erik Dahlbergh. Second half of the 17th century. During the 1655-1660 war, battles were fought in Sandomierz, near the confluence of the river San and Vistula in the spring of 1656. On 24 March, the Polish army surrounded the King of Sweden Charles X Gustav. The Swedes broke the encirclement and started to retreat. The Polish army was aided in the fight for Sandomierz by Lithuanian divisions, led by the Grand Hetman of the Grand Duchy of Lithuania Paweł Jan Sapieha (1609–1665).

4th: Battle of Sandomierz, 25 March 1656. By Erik Dahlbergh. Second half of the 17th century. On 25 March 1656, a second battle broke out near Sandomierz. The army of the King of Sweden Charles X Gustav fought against the army of Poland with Lithuanian divisions led by the Grand Hetman of the Grand Duchy of Lithuania Paweł Jan Sapieha. The battle was won by the Swedish army.

5th: The Siege of Lithuanian Brasta on 11 May 1657. By Erik Dahlbergh. Second half of the 17th century. The Lithuanian Brasta (modern Brest in Belarus) was one of the most important cities in the Grand Duchy of Lithuania, part of the Voivodeship of Trakai. On 11 May 1657, the Swedes and their allies, Transylvanians and Ukrainian Cossacks, surrounded the fortress of Brasta. The divisions led by Hetmans Paweł Jan Sapieha and Stanisław Potocki (1589–1667) retreated, leaving behind a crew of 2,000 soldiers. In a few days, the crew gave in to the Swedes who plundered and burned the city.

7th: Outlines of the fortifications of Mintauja and Duobelė, 1659. Mintauja (modern Jelgava in Latvia) and Duobelė were cities with mortar castles. They were part of the Duchy of Courland, which was a vassal of the Polish Lithuanian Commonwealth.

8th: Outline of the city and fortress of Dünaburg in 1655. Engraved by Willem Swidde. Second half of the 17th century. Dünaburg (modern Daugavpils in Latvia) was one of the biggest cities of the Duchy of Uždauguvis, lands of Latgala. It was an important strategic city with a strong mortar castle, which was completed in 1582 by the Ruler of Poland and Lithuania Stephen Bathory.

9th: Outline of the fortifications of the city of Königsberg. Königsberg was the biggest city of Eastern Prussia. It was called Königsberg in German, but the Latin name Regiomontum became more prevalent in the 16th century. From the 16th century on, Lithuanian texts from Lithuania Minor and Lithuania Proper use the Lithuanian name Karaliaučius. Königsberg was the residence of the Duke of Prussia in 1525–1701, and became the capital of Prussia in 1660. On 17 January 1656, the Duke of Prussia Friedrich Wilhelm (1620–1688) made an agreement with the King of Sweden Charles X Gustav, by which Friedrich Wilhelm severed all ties to Lithuania and Poland and became Sweden’s vassal.

10th: Map of the Kingdom of Poland and Grand Duchy of Lithuania. Drawn by Erik Dahlberg, engraved by Louis Cordier. 1660s. The map was drawn during the war of 1655-1660. The cartouche shows the united coat of arms of the Polish Lithuanian Commonwealth with a battle scene on its right. The map is decorated with the coats of arms of the Grand Duchy of Lithuania, Samogitia, the Voivodeship of Trakai, the Kingdom of Poland, and the Polish Voivodeships.