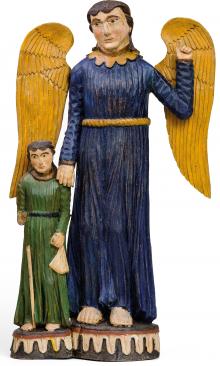 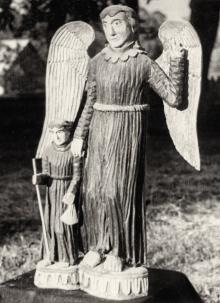 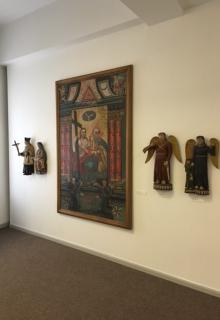 An angel is a symbolic messenger and representative of God the Father on Earth. Angels are God-created powerful non-corporeal spiritual beings. Angels are depicted as youngsters with hands stretched out for blessing or as children or sometimes as heads of infants with wings. According to the Bible, every Christian has a guardian angel who inspires them to do good deeds and protects from evil. Angels are considered to be mediators between God and people, the only servants of God who fulfil God’s will and participate in the lives of men. All angels belong to different ranks. The angels of the highest hierarchy intended to reveal Lord’s will were the archangels Gabriel, Michael and Raphael.

Archangel Raphael is considered to be the angel of healing, teaching and knowledge, and guardian of pilgrims and other travellers (especially young people). In the Lithuanian worldview, he performs the role of a guardian angel, a companion in man’s spiritual journey. Raphael is usually depicted as a large angel with wings together with a child who is ready to travel. A large figure of Raphael with a child by his side gives an impression of guardianship and security; the angel is leaning towards the child holding his hand.

Photographs: from the shrine in the churchyard, photograph by Juozas Petrulis, 1956; display in the exhibition "Collected and Preserved", September 2016 - January 2017, National Museum of Lithuania, Vilnius.