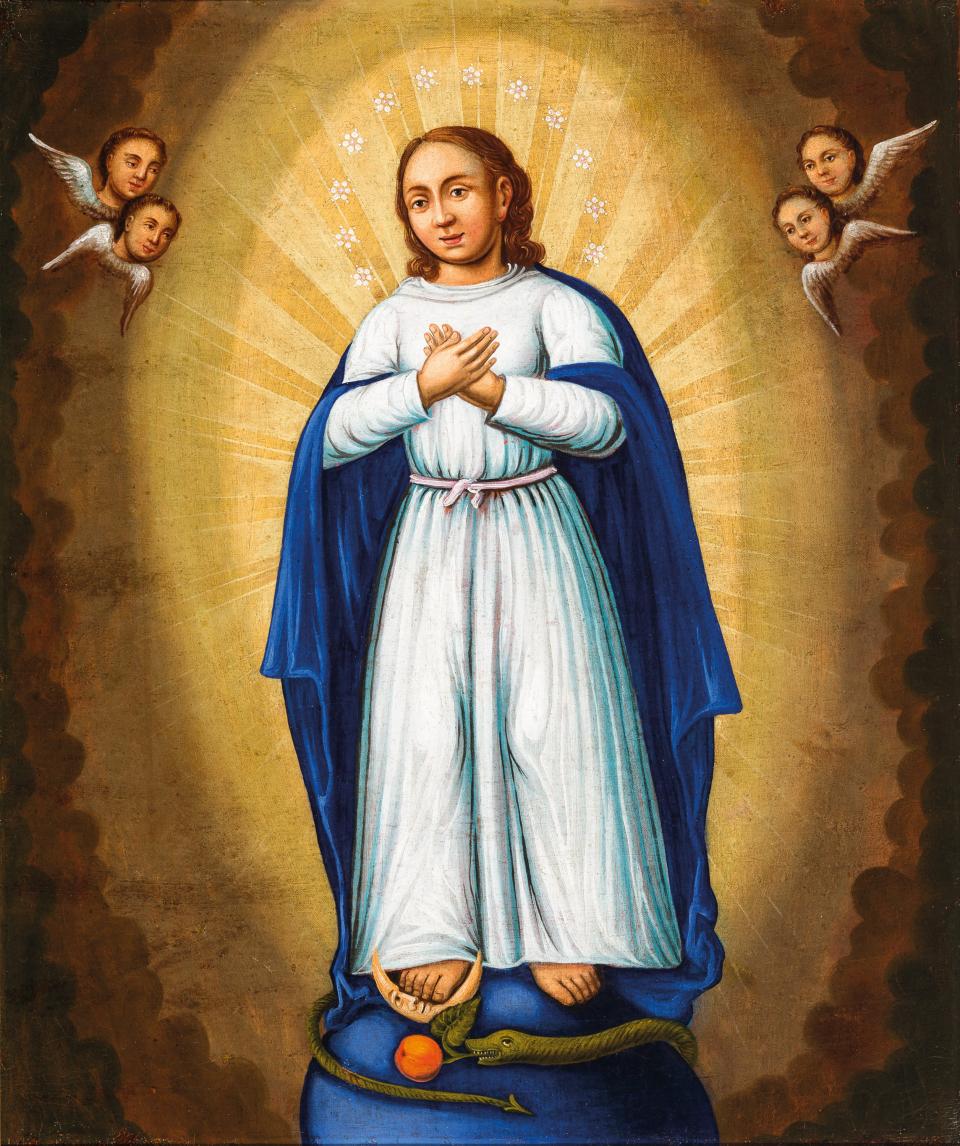 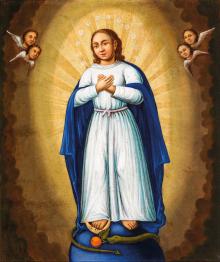 Created: second half of the 19th century.

The Immaculate Conception of the Blessed Virgin Mary is a depiction of the Blessed Virgin according to the visions experienced in 1858 by a young French girl, Marie-Bernarde Soubirous (Bernadette). Mary was incredibly beautiful. In the last but one apparition she revealed herself as the Immaculate Conception, and told the girl to dig into the earth until a spring of water which has curative powers appeared.

Mary is depicted standing on the globe, with her hands pressed piously to her chest, the crescent sickle under her feet, one foot on the serpent which holds an apple in its mouth and which is a symbol of evil and sin. The white robe symbolises innocence, purity, truth, and the blue robe, the crown of the twelve stars, and the sunlight symbolise the Kingdom of Heaven. The head is covered with a white veil and less often with a crown. The Virgin Mary dressed in glory and majesty as if they were clothes radiates light, because she is the only person born without sin. Such sculptures are placed in grottos and by water springs. It is believed that water from these springs help regain vision and cure the most severe diseases.

From the beginning the Lord decided to send His Son into this world, so from early times He also knew about the virgin who would give birth to the Son of God. /.../ Sister Mary says she heard the Holy Trinity talk amongst themselves, ‘The moment has come to do proper work for us. The moment has come to send a virgin soul to the world, which we and the people will love. Let’s give the gifts of our love to her. /.../ Let’s create her as we wish she should be, so that standing for ages before us she will always please us; let there be one great person like, but unlike others. Let’s make her like the angels and like people were before the arrival of sin. Let’s surround her with our love, because I wish to descend from the heavens to her life and take a human body from her by birth. This is necessary so that the eternal Word will choose the purest body, hidden in which it would take a human life. The Word must have a mother on earth without a father, who has father in heaven without a mother.’ (Motiejus Valančius, „Gyvenimas Švenčiausios Marijos Panos“, Raštai“ 3, p. 165)