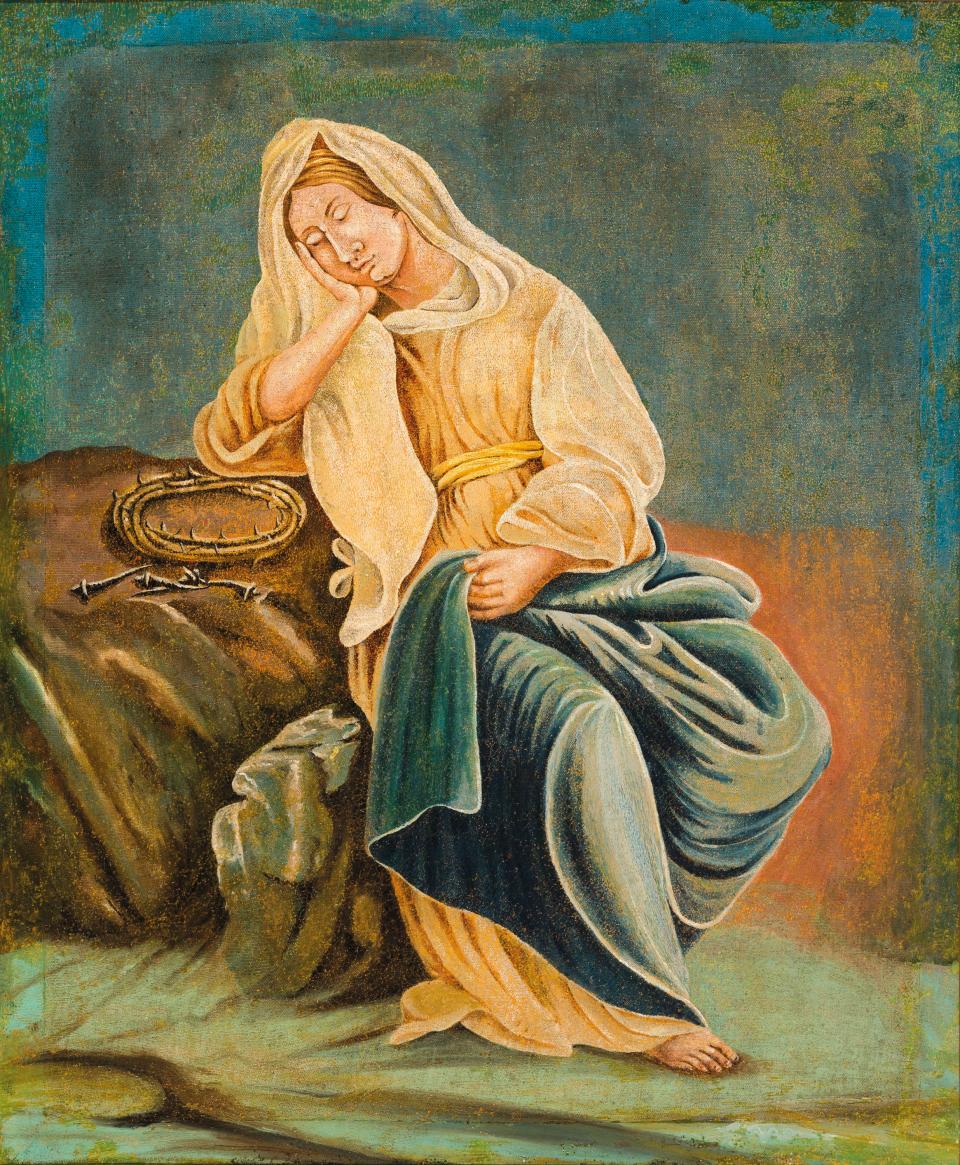 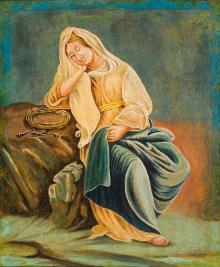 Our Lady of Sorrows

Our Lady of Sorrows is a depiction of the Blessed Virgin Mary, which symbolises the pain the Mother of God had to suffer seeing the Passion of her Son on the cross. Mary is depicted standing, dressed in white with a blue robe. Her head is covered with a veil or a crown. Her hands are clasped in prayer and there are seven daggers piercing her heart. The first dagger pierced her heart when she saw Jesus being taken at night to the trial; the second – when she saw her Son badly scourged; the third – when she saw the crown of thorns placed on Jesus’ head; the fourth – when she met Jesus on the Way of the Cross, the fifth – when Jesus was being nailed to the cross; the sixth – when her Son died on the cross; and the seventh – when she saw his body taken down from the cross. All of this was predicted by Simeon, a priest.

Sometimes the Mother of God is depicted sorrowful and lonely with the instruments of Jesus’ torture at the time when he is being taken down from the cross.

At the sight of the horrible wounds of her Son, Saint Mary was so overwhelmed by sorrow that it was just a miracle that she did not drop dead there together with her Son. The sorrows of Mary standing at the cross were greater than the suffering of all the martyrs of God. Seeing and knowing this, Jesus Our Lord said, ‘Woman, here is your son’. Saying this he pointed with his head to St John. And he told the apostle also pointing with his head to Mary, ‘Here is your mother’. From that moment St John treated Holy Mary as his real mother and took care of her. /.../ Those words pierced the heart of the Queen of Heaven, because instead of God as a guardian she received the a real man as a guardian. Instead of the Son of God she had the Son of Zebedee.

Ladders were placed by holy men against the cross and first of all the crown of thorns was removed and was given to Saint Mary who, weeping, kissed it, because it was stained with blood. Then the three nails were drawn out and the body was lowered down to the ground. Mary placed the body across her lap and wept. [Motiejus Valančius, „Gyvenimas Švenčiausios Marijos Panos“, Raštai 3, p. 275–277]