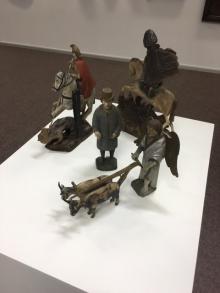 St George is the holy martyr, the second patron saint of Lithuania. In the Lithuanian spiritual worldview, he is associated with the revival of nature in spring and he is the guardian of fields and livestock. He is depicted as a knight fighting for Christianity or the defender of innocent people, the defender of a princess against a dragon.

Executioners tied St George to the wheel. At the bottom of the wheel there was a board with sharp nails. They started turning the wheel and as soon as the wheel went down the nails scratched St George’s body. Thus being torn alive, first he called Christ, then murmured something and then stopped. His blood was pouring out of him, so the executioners thinking that the martyr was dead walked away. /.../ a thunderstorm struck, an angel descended from the sky, untied St George, healed him and said, ‘Don’t be afraid, martyr, your God is with you.’ /.../

The saint martyr even though a prisoner miraculously treated various people and had a lot of followers. Among others was Glicerius, a poor farmer, who came up to St George and said, ‘Dear George, help me! I had one ox, but it passed away and I have nothing to plough with nor any money to buy another ox.’ The saint replied: ‘Go home and your ox will be revived.’ The farmer did what he was told, went back home and found his ox grazing, and Glicerius became a believer of Christ. Therefore, since then people pray God through St George to retain their cattle. (Motiejus Valančius, „Žyvatai šventųjų“, Raštai 2, 2006, p. 145–151)